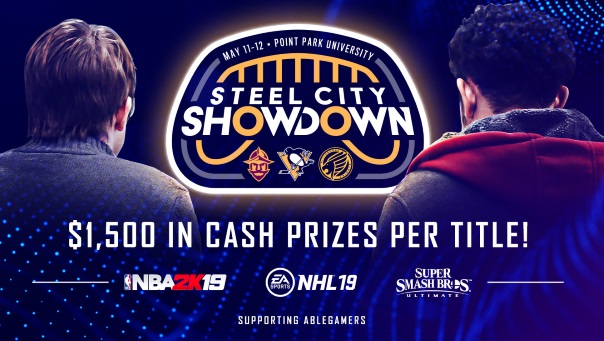 The AbleGamers Charity — the leading organization dedicated to improving the lives of those with disabilities through the power of video games — today officially announced their partnership with Point Park University, the Pittsburgh Penguins, Cleveland Cavaliers, and Pittsburgh Knights by bringing to Pittsburgh, Pennsylvania the city’s first-ever esports tournament — the Steel City Showdown. Rulesets for each competition can be found here.

The Steel City Showdown will take place May 11 – 12, 2019, at the Pittsburgh Playhouse, and feature competitions in Super Smash Bros., NBA 2K19, and NHL19, with $1,500 in cash prizes per title. A portion of the ticket sales will be donated to the AbleGamers Charity. Competitor fees are $10 for Super Smash Bros. and $20 each for NBA 2K19 and NHL19. Spectator tickets are $5 for the weekend. The box office will open at 11 AM ET, while doors to the venue will open at 12 PM ET. Tickets can be purchased on-site or online below.