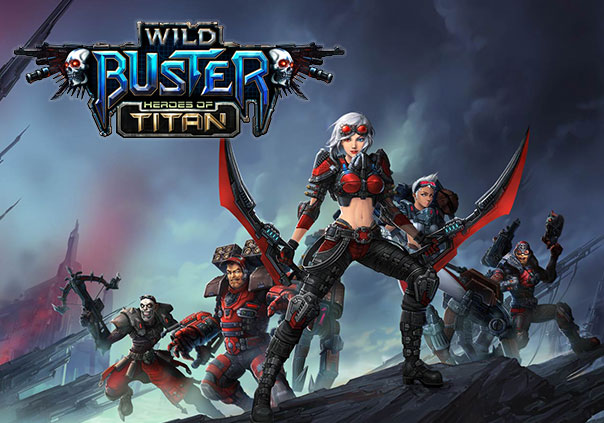 Wild Buster is an upcoming sci-fi action MMORPG developed by Nuri Vista for PC and will be available on Steam Early Access. In Wild Buster players can engage in intense RPG hack-and-slash gameplay and choose between two warring factions of the human race, Guardians and Abandon, and work against their enemies to save the universe.

This militaristic science fiction universe is outfitted with over 20 unique characters that you can play as. Each character is on the side of either the Guardians or Abandon, but both must work together to stop the Brokken, a half-man half-machine race trying to convert what remains of the human race into Brokken. Guardians are a military organization with the mission to protect all humans and the Abandon are an alliance of unbound, wild mutants that are less organized, but adept at surviving in harsh environments. Every character has a unique ability and role to serve a group, whether it be fighting off the enemy up close with swords and shields or blasting at them from afar with guns and missiles.

If you find that you just can’t think about defeating the Brokken without first settling the score with your opposing faction or even your allies then you can take part in different PvP matches. Battle in squad leagues of 5v5 and 10v10, fight in 4 different open PvP zones, or go to the free-for-all treasure brawl where the winner takes all the spoils! Make sure you don’t forget about the Brokken threat, but make sure to make time to prove your worth to Guardians and Abandon alike as well!

A war of desperation has broke out in the world, resulting in a gritty, science fiction mess. Team up with the opposing faction to protect humanity from the Brokken, but try not to let your differences get in the way in Wild Buster!

Wild Buster takes pieces of different gameplay from many genres and mashes them all together into a hack and slash action RPG.

Wild Buster: Heroes of Titan gears up for Early Access with a Beta Weekend

Insel Games is getting set for Early Access to their Sci-Fi MMO Wild Buster: Heroes of Titan to play this weekend!

The "Broken" are not prepared for this: Serious Sam, one of the most badass shooter characters of all is coming to Wild Buster!

Planet Titan is in need of immediate emergency assistance! Evil Cyborgs are overrunning the place and Insel Games in the Wild Busters!

Wild Buster: Name a Boss with the Crowdfunding Campaign