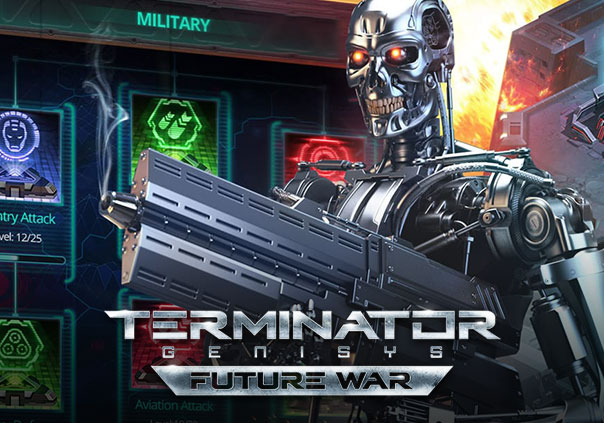 Terminator Genisys: Future War is a free-to-play mobile strategy game where the human Resistance is locked in a never-ending war with the machine army. Genisys is destroyed and the Skynet is offline, but that doesn’t mean the war is close to an end. Players will engage in large-scale warfare in an effort to sway the tides between man and machine and secure victory for their clan.

Two different factions are available for you to choose, making you a Resistance Commander or a leader of Skynet’s Core. Do you want to help humanity survive or crush it before it ever has the chance? This is the choice you will make. As a human Commander it is up to you to rebuild humanity’s military force, find survivors to recruit to your cause, and ultimately stop the machines from reactivating Skynet. If all else fails you could always convert yourself and join the side of the machines. Maybe you want to play as a machine leader from the very beginning. Become an unstoppable killing machine, construct factories, find lost battle schematics, and terminate the human threat to finally end their existence. If somehow you become sympathetic to the human cause, you can make the decision to reprogram yourself and fight alongside the Resistance.

With clan members you will be able to dominate entire maps with your influence and participate in joint clan attacks. If you’re more of a solo player you can go on solo conquests and fight against powerful bosses in solo PvE. There are ways to swing the war in your faction’s favor whether you want to play with friends or tackle threats head-on by yourself.

Both sides are fighting for their lives and defeat is not an option. Use futuristic weaponry and relentless troops to bring an end to the future war once and for all!