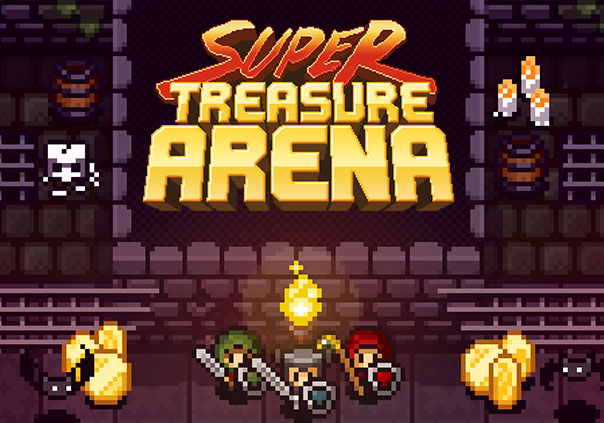 Super Treasure Arena is a buy-to-play fantasy action game developed by Vennril for PC and Mac and is available for purchase on Steam Early Access. Super Treasure Arena mixes the concepts of both retro arcade action games and objective-based arena shooters to become a game all of its own where players will fight against each other in frantic matches to steal each others coins!

As players battle against one another in arenas from a top-down perspective, they will come across a variety of weapons that can be picked up to give them different advantages like bows, magic staffs, bombs, rockets, and more! Every player’s character can be of five different classes: Warrior, Mage, Rogue, Ninja, and Mystic. Many of the classes play similarly, but where they really shine is in the differences in their ultimate abilities, like the Warriors being able to become invulnerable for a short amount of time. Knowing when to activate your special ability can be key in your strategy for success.

Super Treasure Arena also makes sure to give players the utmost control over their multiplayer experience. You can choose to play online against other players, against computer-controlled bots, locally with your friend via split-screen, or in a mix of the ways that have already been mentioned. This way everybody can be sure to get the exact multiplayer experience that they want.

Action, treasure, and eager opponents await a worthy challenge in Super Treasure Arena. Maybe you should go check it out and give them a taste of their own medicine.