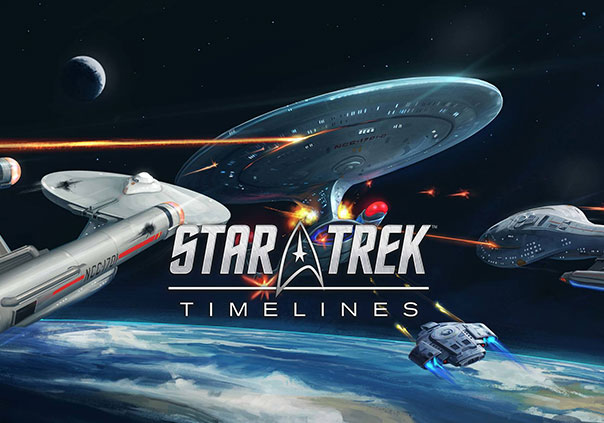 Star Trek Timelines is a free-to-play mobile sci-fi game developed by Disruptor Beam for iOS and Android. In Star Trek Timelines players can join Starfleet and explore the Final Frontier as they overcome challenges throughout the entire history of Star Trek!

On your journey you’ll be able to assemble your crew from hundreds of different characters from the Star Trek universe including the original Star Trek, The Next Generation, Deep Space Nine, Voyager, and Enterprise as well as pilot many of the different ships you’ve come to know and love like the USS Enterprise, Voyager, Defiant, the Borg Cube, a Klingon Bird of Prey. These ships will be used in exciting 3D ship battles that can be conducted in a PvE setting or in the new PvP Battle Arena.  The only way to know your crew’s true capabilities is to put them to the test against every and any formidable foe you can find! If you’re skilled enough and find yourself climbing through the leaderboards then you’ll even acquire some rare rewards.

Your adventures will also bring you into contact with many of the different factions from Star Trek like the Federation, the Maquis, the Dominion, the Terran Empire (TOS: “Mirror, Mirror”), and Section 31. Play your cards right and you might gain influence among them and find that it would be in your best interest to work with them further.

With great graphics that bring your favorite Star Trek ships to life, a slew of crew members to choose from, and exciting rewards to be earned Star Trek Timelines will draw you into the Star Trek universe that you’ve come to know and love! So choose your ship, choose your crew, and go explore the galaxy!

Disruptor Beam, the company that brings together fan communities and games, has announced today its plans to produce a new Star Trek strategy roleplaying game (SRPG).

The free-to-play Star Trek: Timelines spans all fifty-one years of the Star Trek timeline, and the current story is no exception!

It's the first Star Trek TV show in more than fifteen years and promises to be a grand undertaking: Star Trek: Discovery.