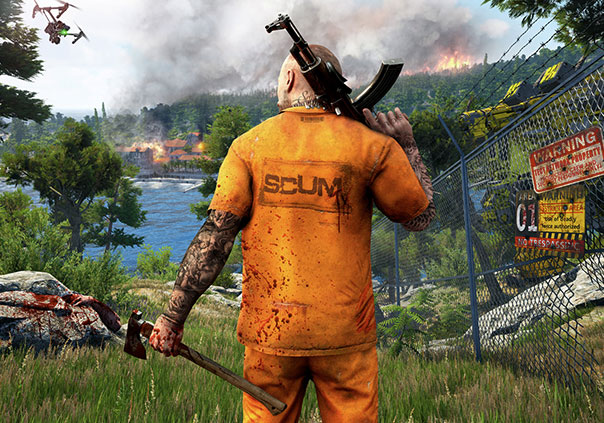 SCUM is a 3D survival game developed by Devolver Digital for PC and will be available sometime in 2017 on Steam Early Access. In SCUM large private corporations have obtained complete control of the entire world, resulting in a world that is completely ruled by greed. The gap between the rich and the poor is at its largest point in all of history and the elite have brought the world to its knees, enslaving most of the population. The majority of the population doesn’t agree with how the world is being run, but if anyone decides to revolt they are quickly taken down and brought to privately owned correctional facilities.

This is where you come in. Playing as a prisoner of the elite, you are now their plaything and must fight for your own survival for the sake of others’ entertainment. Both fan-favorites and newcomers will clash as they fight for their own survival in a televised event to appease the wealthy. You will need all of your  knowledge, skills, and experience to stay safe and take down any hostile prisoners. Remember that viewers, producers, and corporate sponsors will all be watching the fight, so make sure to keep it entertaining for your own sake in the long run.

SCUM gives players the chance to manage a variety of different character traits like nourishment, metabolic rate, body mass, combat proficiencies, and even things like security systems hacking. Every skill can be of use in your survival tactics, but it’s up to you to choose which ones are the most fitting for your current situation. If you perform well and appease the viewers, then sponsors will send you gifts to help you on your way to fame by combat. If you happen to be one of the unfortunate ones to fall in battle, have no fear! The show’s producers will find a way to resurrect so that you can fight another day with all of your hard-earned skills still intact.

Sure it isn’t an appealing thought that the world is completely dominated by greed, but you don’t really have a choice do you? The best you can do is sharpen your mind, body, and skills to help you take down every hostile prisoner that comes your way to ensure that you’ll survive yet another day.