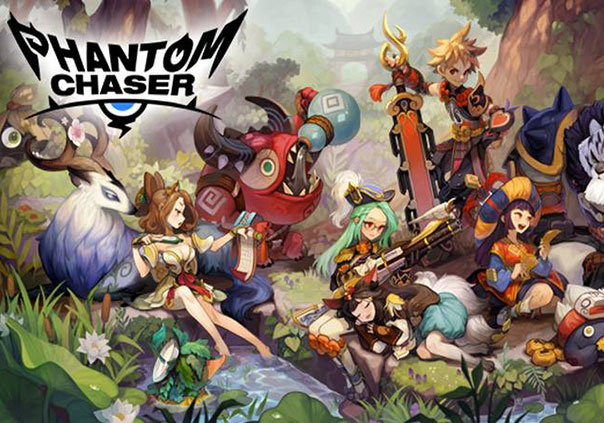 Phantom Chaser is a mobile free-to-play fantasy RPG developed by Floppygames Inc. and published globally by Glohow. It is an upgraded version of Yokai Saga, published by Netmarble in Korea and Thailand.

In Phantom Chaser players can manage their own team of of various characters in an epic story to defeat the mighty evil all the while encountering different Phantoms on their journey.

Your team can be composed of Phantoms that fill different battle roles like melee, mid-range, and long range. Phantoms can use a unique feature called ‘Mimic’ which allows them to possess one of your characters and obtain new powers during combat. With near-impossible obstacles in your way, learning when to have your Phantoms use ‘Mimic’ will be invaluable in your success. Combine Phantoms with your regular characters to push your team’s possibilities even further and take direct control of your characters in battle for precise attacks. Strengthen your Phantoms by leveling them up, upgrading them, transcending them, and evolving them into the most powerful versions of themselves possible.

Play through Story Mode and Battlefield’s many game modes to help your team grow stronger and fulfill their final goal, but once you’ve completed the game’s story don’t think you’re done there! Challenge other players in Arena mode and climb your way through the leaderboards in search of glory and the chance to strengthen your team even more. There are always new opponents and challenges waiting to be taken on when there are awesome weekly prizes to claim at the end!

With exciting strategic controls and impressive graphics players can expect a broadened fantasy RPG experience in Phantom Chaser. Create your perfect team of Phantoms that can take on anything in their path and show the world that your team is the best!

Phantom Chaser is a free-to-play mobile strategy game from Floppy Games for Android and iOS systems.

Phantom Chaser comes to the West

Originally known as 'Yokai Saga' in Korea and Thailand, an enhanced version called Phantom Chaser comes to the West.

Floppygames and Glohow have recently released a major new update for Phantom Chaser, renewing the game with adjustments and new content.