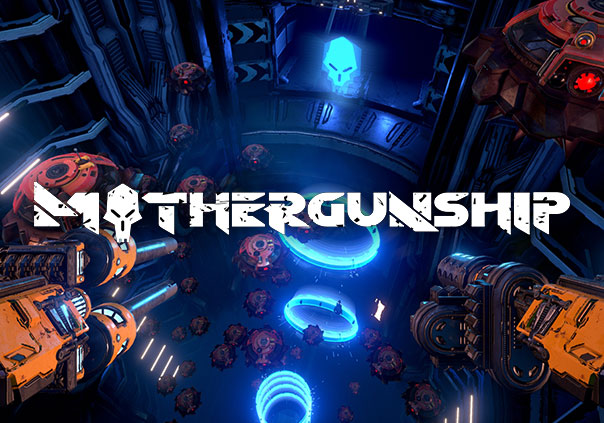 MOTHERGUNSHIP is an upcoming 3D sci-fi shooter developed by Grip Digital for PC, Xbox One, and PS4. It will also be available for purchase on Steam upon release. In MOTHERGUNSHIP players can experience a mix of bullet-hell intensity with exciting first-person shooting and customization!

Face off against overwhelming odds in brutal, fast-paced combat where quick thinking is the only way you can stay alive. Take on tons of different ships, each hosting its own slew of alien machines, deadly traps, and intimidating bosses with the sole purpose of stopping you from saving humanity. Armadas of data-hoarding robotic alien invaders wait in the wings of every ship you conquer, so you’d better make sure you’re always ready for more!

To take down the hordes of invaders you’ll need to create your own personalized arsenal of destruction. By taking advantage of your modular crafting systems you can create the exact weapon you need. Want something that shoos bolts of lightning? You’re covered. Need something a bit more explosive that shoots homing missiles from different barrels? Light ’em up! Whatever purpose behind the modification, whether it be functional or aesthetic, you can customize your weapon to be the deadly force you’ve always wanted it to be. Make your arsenal your own!

If you find alien forces are just too much to handle on your own, consider joining up with the global resistance movement and take back the Earth with your friends. Fight alongside one another or simply participate in the community as you strive towards the common goal of bringing down the MOTHERGUNSHIP.

Whether or not you’re prepared the alien robots are on their way and ready to collect as much data as possible. Craft and customize your weapons to fit any role and go to war. Bring down the MOTHERGUNSHIP and save humanity!