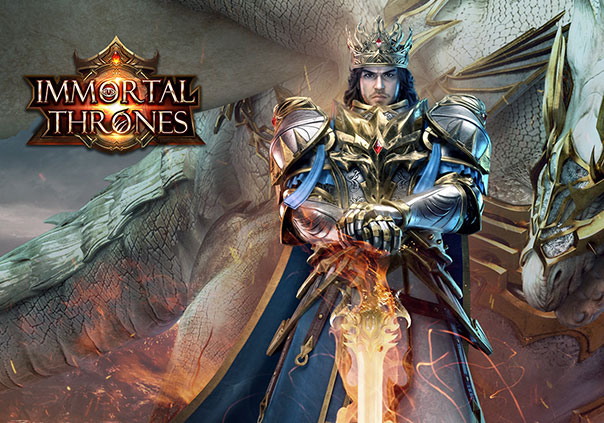 Immortal Thrones is a free-to-play mobile fantasy MMORPG developed by ZLOONG for iOS and Android where players can level-up their own characters and fight for thrones and glory in Global Battlefields and State Wars. From Saturday to Thursday heroes are summoned to serve for their state where they must fight to expand territory, obtain resources, and improve prestige. The higher the prestige you can acquire the more rewards that are sent to your state, and yourself. This means the better you perform, the better your rewards! Every day State Wars will also be available for higher level players, giving them a chance to fight alongside other states against common enemies. Not only can you acquire more experience by participating in State Wars, but you can also gain Merit points, equipment, and extra rewards if you win often and rank highly.

Players can become one of four different classes that will let you do everything from tank enemies for your allies to bombard them with spells from a distance. Each class has two separate advancement paths that can be taken that will specialize them further in a variety of ways. And advancement could strengthen a player’s original concentration, defense, crowd control, area effect, and damage dealing abilities or add other interesting attributes to players.

Even more exciting is the fact that livestreaming is completely integrated into Immortal Thrones. This makes communication while livestreaming more effective and easy than ever before. Keep your typing hands free so you can focus more on the battle at hand and less on livestreaming issues. Now your streams are sure to be filled with fierce combat, glorious castles, mysterious and ancient kingdoms, lofty mountains, gloomy forests and more. There is a magnificent world out there to explore and it shouldn’t be hard to share with your friends!

Immortal Thrones not only delivers a magnificent world for you to explore with exciting combat, but makes it easy to share too! Customize your characters, level them up, and livestream it to make sure all of your friends can see you displaying your skills!

At face value, this is a gorgeous MMO. There’s plenty of the standard mobile MMO stuff you’ve come to expect from these games.

Immortal Thrones is a brand-new 3D fantasy MMORPG for mobile devices, and it's officially launched in North Americ and Europe!