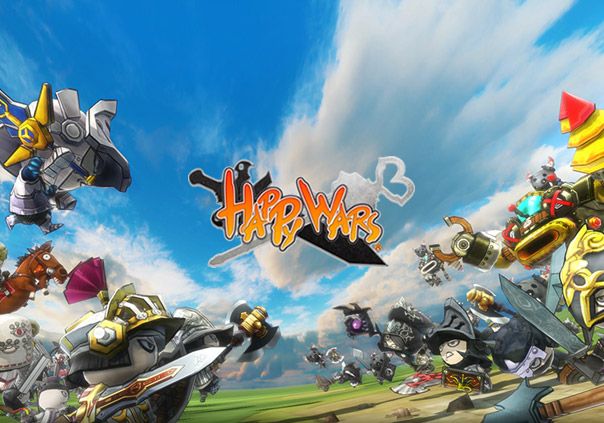 Happy Wars is a free-to-play 3D MMO where players charge through battlefields and take part in crazy, whimsical battles of up to 30 players. In Happy Wars, players are able to fully customize their own character from one of three classes and fight in melee battles and sieges. Happy Wars supports Singleplayer, Co-op, and Multiplayer matches. In Singleplayer players can run solo missions. Co-op is an online game mode where players work together to defeat a team composed of AI characters. Multiplayer is also an online mode, but in this mode two teams of 15 players will battle it out and utilize powerful team-based skills to siege the enemy castle.

The three character classes in Happy Wars are:

Mage – A ranged attacker who uses spells of different elements like fire, lightning, and ice to damage their enemies.

Warrior – A melee attacker who can use a shield to deflect magic attacks, guard allies, and can even cheer for their party members to boost their battle effectiveness.

Cleric – A support class that can heal allies to keep them alive, dispel buffs from enemies, and summon walls to block foes from reaching important objectives.

Toylogic Inc. has announced that the Xbox 360/Xbox One battle game Happy Wars will release for Windows 10 on December 15, 2016.