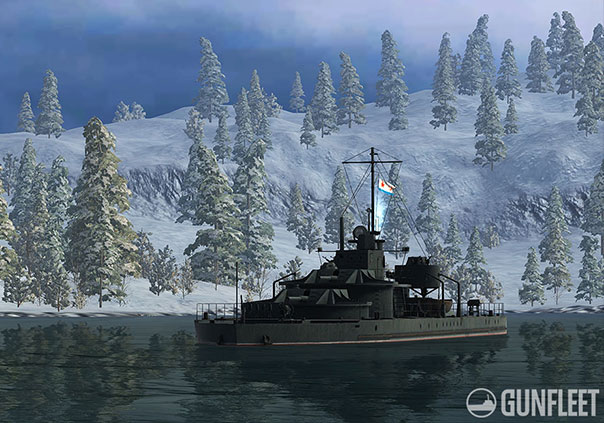 GunFleet is a free-to-play ship shooter MMO developed by Areo Gaming for PC and is available on Steam Early Access. Inspired by the mosquito fleets of different countries of the First and Second World Wars, GunFleet puts players in command of their very own ship that can be used to battle other players. Torpedo boats, submarines, river monitors and more can be brought under your command and used to blow your foes to smithereens!

Over 40 different units can be controlled and outfitted with weapons like rocket launchers, depth charges, torpedo cannons, long caliber guns, and autocannons. Each of these units currently represents one of four different countries: Russia. Japan, Germany, and the United States of America. With them comes all of the aesthetics one would typically see of ships designed by their respective countries, and of course their thrilling firepower as well!

Currently battles can take place in one of 15 different areas from the Arctic to tropical islands. In each battle two teams of up to 7 players will take each other on in the game mode of their choosing. Everything from protecting convoys to straight up exploding your opponents can be done to achieve victory.

There are plans to include new features as the game progresses through Steam Early Access including new nations and new unit types, even expanding into the realm of naval aviation. New ships will see new weapons being added for them to use like naval mines, deployable coastal guns, spotters, and even charges for kamikaze ships! There are also plans for tournaments, a clan system, and new game modes to help keep gameplay fresh and help you connect with the community.

There are numerous ships to play, game modes to play in, and customization options to choose from, but all you need to do is create your ship, choose your game, and eliminate your opponents! Become a true king of naval warfare in GunFleet!

If you've played any of the World Of games or War Thunder, you'll be fairly familiar with the formula for the game.