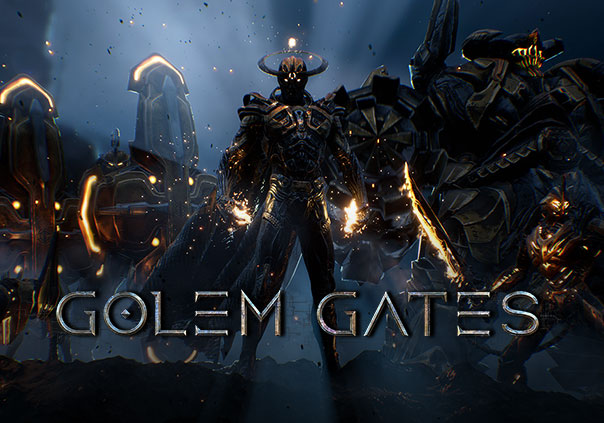 Golem Gates is an upcoming fantasy strategy game developed by Laser Guided Games for PC and will be available for purchase on Steam Early Access in December, 2017. In Golem Gates you can become a Harbinger of a desolate land ravaged by ancient wars. As a Harbinger you have the ability to manipulate and command nanites from ‘The Ash’ – a power that has manifested itself in your world’s now barren atmosphere. Now ancient warrior machines are spawning from Golem Gates while an unseen force compels you to take up arms.

Players collect spell cards called Glyphs and strategically form them into a deck as they prepare for battle. Nearly 100 Glyphs can be used including units, buildings, traps, buffs, debuffs, and techs. Resources will be needed to summon your nanites from your cards so take advantage of Golem Gates’ streamlined resource management to create your units while keeping the focus on the fast-paced, highly tactical encounters before you. Capture your resources king of the hill style, not with extra dedicated gathering units that you’d need to manage. Strategy will always play a key role in your success, but that doesn’t mean you won’t be able to watch the action unfold in this game!

Players can choose to either take on a singleplayer campaign that will help them explore their powers as a Harbinger or take to heated online modes. Whether you’re looking for some offline fun or some intense competitive and cooperative online modes Golem Gates has a game mode for you!

If you’re looking for a game that dares to blend action and strategy, then look no further than Golem Gates. Wield the power hidden within ‘The Ash’, battle the golems, and unravel the mysteries surrounding their long-lost creators!