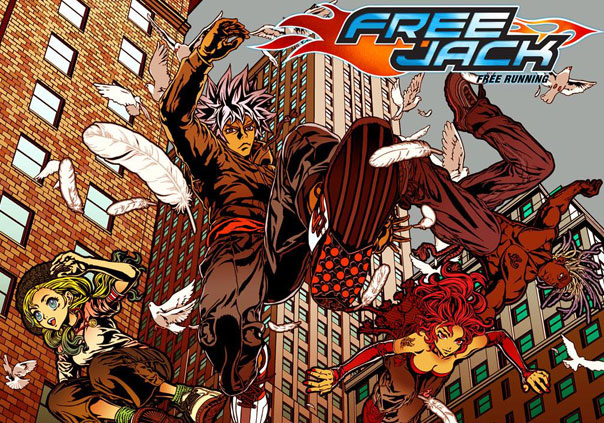 In FreeJack, players race on foot through the urban environments of New Jack City. Getting from point A to point B requires jumping from rooftops, over cars, walls, and overcoming other obstacles. FreeJack mixes the odd but interesting ‘parkour’ concept with the crazy and casual friendly gameplay found in kart racers. Players will be able to chose from many modes, use items on one another, and create clans to face off against each other. Single player missions and the ability to decorate an instanced home add variety to FreeJack.

Jin (M) – The leader of the Andro Bob-omb, Jin turned to free racing to get back at the man who stole his lobster pie. Special: Agility

Nadia (F) – A former gold medal gymnast, Nadia is now a private detective who is undercover as a runner. Special: Technique

Goodspeed (M) – The most famous quarterback in New Jack City. Saul Goodspeed turned to running after a stint in dentistry. Special: Toughness.

Tina (F) – Despite her size, Tina is a master of Judo and physics. She turned to racing to help find her former sensei. Special: Speed