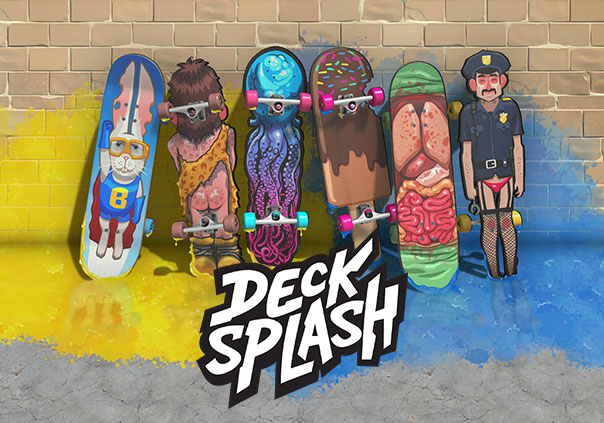 Decksplash is a 3D skateboard turf-war game developed by Bossa Studios for PC and is available for download on Steam Early Access. In Decksplash players can engage in a turf-war like none other by spinning, grinding, and splashing their deck as they battle against opponents to cover the arena in their paint.

Battles take place in fast-paced 3 versus 3 matches where teams will try to cover as much turf in their color paint as possible. The team with the most area painted at the end of the game wins. Don’t think it’s just as simple as riding around on a skateboard. In Deckplash you’ll need to utilize all of your moves to create as large of a combo as possible before you splash back down onto the ground. The larger your combo, the larger your paint splash and the further you’ll put your team ahead! What’s even better is you’ll have full control of your board. That means you can execute tricks exactly how you’d like, taking advantage of your maximum potential!

Players will also be in charge of disrupting their opponents’ movements, making sure they can’t keep up and continue to splash their paint. By building up your Shockwave meter as you ride through your team’s paint you can unleash a powerful blast that will cause your opponents to lose their combo and falter. Your Shockwave can also be used to place a Score Zone at strategic points in the arena. If your friends can land tricks in the Score Zone they can nail a score multiplier and propel your team’s score.

When you’re in need of turf, sometimes you just have to claim it for yourself no matter what anyone thinks. Show everyone that you mean business by executing sick combos and painting the arena in your color in Decksplash!