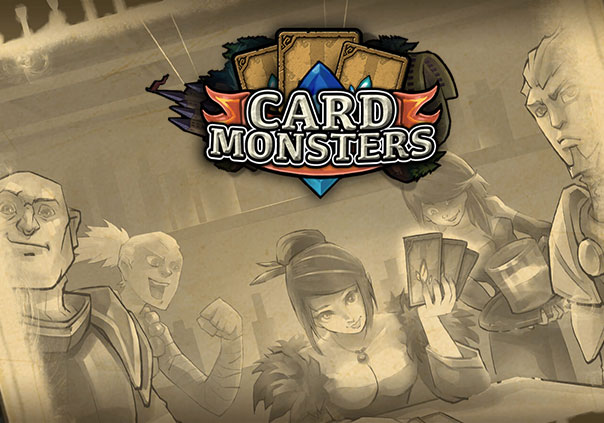 Card Monsters is an upcoming free-to-play mobile TCG being developed by Edgebee for iOS and Android, but it is also currently available in a browser game version on various web-game sites. In Card Monsters players can follow a singleplayer campaign where they will be guided by an already seasoned adventure who gives them helpful hints and tips about their battles on their journey. As you clear the story new quests will become available for you to complete and gain new rewards from.

In battles players will have to manage their hands carefully, choosing to play or hold their cards in whatever manner they think will prove to be the most advantageous. You will start out the battle with 4 cards in your hand: 2 Monster cards and 2 Equipment cards. By placing Monster cards on the battlefield they will get put into play, whereas Equipment cards can only be played on a player’s own Monsters once they are in play. Your opponent will also get to set up their side of the battlefield after you, and then the battle begins! Battles are completely automated and your monsters will get to attack first. The Monsters that you play can be either ranged or melee oriented so you will need to decide what ones to put on the front lines and what ones to put on the back lines to outplay your opponent’s potential moves.

Card Monsters also includes a Duel system where players can pit their decks against AI-controlled decks of other players. If you collect enough points from duels and climb through the rankings to one of the top five positions, then you’ll be rewarded with gold which will prove ever useful in helping you grow even stronger.

With a simple battle system, friendly art style, and numerous strategy options Card Monsters will be easy for anyone to pick up, but still provide rewarding battles in a clean interface!