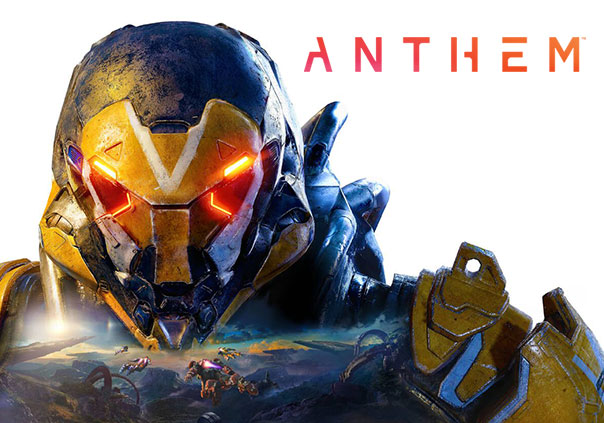 Anthem is BioWare’s upcoming 3rd person c0-op RPG/shooter, with heavy emphasis on cooperative play, exploration, and story. Each player will pilot a variety of Javelin exosuits in the air, under sea, and across an ever evolving landscape.

Upon an unfinished world, humanity struggles to survive in a savage environment full of diverse threats. Equipped with incredible Javelin exosuits, a faction known as the Freelancers seeks to tip the balance in mankind’s favor.

►The game will be inhabited by many players, but individual choices by each player will affect their own story experience. Players may opt to play solo, but the game has a heavy emphasis on group play, and they might find the experience to be far more challenging alone.

►As players explore, they will find resources with which to upgrade, modify, personalize, and customize their Javelin suits. BioWare wants to allow players a vast array of individualization in their playstyles.

►Players also won’t be limited to one exosuit, but will be able to customize several different Javelins to suit the needs of the moment and their group.

►Not only will players fight enemies great and small, they will also find the very landscape of the world changing, and finding themselves battling the elements as well.

While there are no ‘classes’ as such in Anthem, there are four distinctly unique Javelin exosuits players may pilot, each fulfilling different roles, which players may switch between when not on mission. All players will begin in the Ranger exosuit, “not because it is the easiest” says their website, “But because it is the most versatile.” They are the “jack-of-all trades, master of none” exosuit. Next is the Colossus. These heavily armored exosuits may not be able to use pistols or sub-machine guns, but they are the only frames capable of equipping the artillery classes of Javelin weapons, such as mortars, cannons, flame throwers, rail guns, and others. The Interceptor exosuit is the most agile Javelin, capable of quick strikes and using disabling ordinance such as the Cryo-Glaive. Finally is the Storm Javelin: This suit is unique in its ability to enhance the latent kinesis abilities of its user, allowing them to utilize devastating powers through a technology called “Seals”. Hurl balls of fire, bolts of lightning, or storms of ice, all from the comfort of your armored suit.