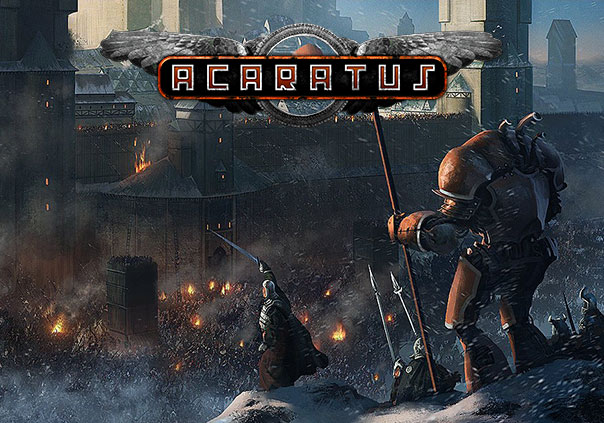 Acaratus is a buy-to-play tactical RPG developed by NODBRIM INTERACTIVE set in a medieval steampunk world where you will fight to take down an oppressive Emperor named Helios. How you might ask? With none other than your trusty mechanized battle suits and your own strategic knowledge!

Since the Valerian Conflict ended the land has been taken over by emperor Helios, who has lead with a strong hand. One might say too strong of a hand. A rich slave dealer called Adina has unwillingly become the leader of a small rebellion against the oppression of Helios, starting to recruit slaves to fight back. They are attempting to set an example of human rights, but they need someone like you to help them reach the peak of their potential if they wish to succeed.

Battles in Acaratus are turn-based with a timer that defines how long you have for your turn. Each unit has its own abilities that can use up stamina, so you’ll have to choose wisely as to when you want to use what skills. Cards can also be played to enhance abilities of your units or give them buffs before your turn has ended, strengthening them up for attacks or defense.

Before combat you can decide on what units you want to bring into battle with you. There are only six that can be brought along, so choose wisely! Each unit can be customized with different steampunkish bits and pieces to your heart’s content. Units will become specialized as their capabilities change with the swapping of these parts, meaning you can customize them for any situation you can predict.

If you’re looking for a game that gives you great control over units and lets you fight for the freedom that you deserve, then look no further. Join up with Adina, help the rebellion, and take down emperor Helios!

Acaratus is a turn based game set in a medieval steampunk setting where you transform scrap metal into parts for your mechs.