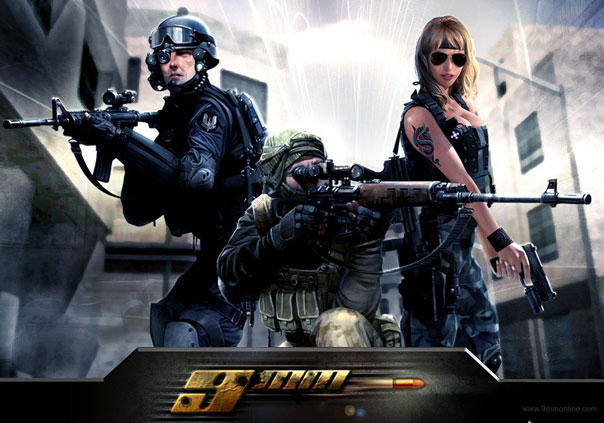 9mm Online is a fast-paced tactical MMOFPS game by Uforia. Choose from one of the game’s factions, level up, and customize your character. Unlike other MMOFPS games that are very linear and have limited character customization, 9mm Online has a great deal of emphasis on individual character growth – much like a traditional RPG. Players can increase their stats like speed, accuracy and health every time they level up. Gameplay-wise, 9mm Online doesn’t deviate from the norm, as it has many of the popular game modes of other titles and practically the same mechanics.

The five game modes are:

Team Deathmatch – Two teams face-off and whichever team reaches the required number of ‘kills’ first wins. This is one of the most popular game modes in 9mm Online.

Plant the Bomb – This game mode is identical to Counter Strike, as one team wins by planting and detonating a bomb and the other wins by preventing the first team from ever planting the bomb or defusing it before it detonates. Nearly every MMOFPS has this exact same game mode.

Mercenary Team Deathmatch – This is exactly the same as ‘Team Deathmatch’, but has some AI controlled players on each team. It’s a great way to keep playing when few people are online. Win by reaching the set number of kills before the opposing team.

Destruction Race – This is by far the most ‘original’ game mode in 9mm Online. Each of the two teams have a number of destroyable targets on their side of the map. Whichever team eliminates the opposing side’s targets first wins.

Free For All – As the name implies, the ‘Free For All’ mode involves no teams and is by far the most chaotic mode. It’s every man for himself.
The game is planned for release in Korea. There is no confirmation yet if the game will come to the West.

As is, there's no reason to play 9mm Online over more established MMOFPS game like Alliance of Valiant Arms or Sudden Attack.